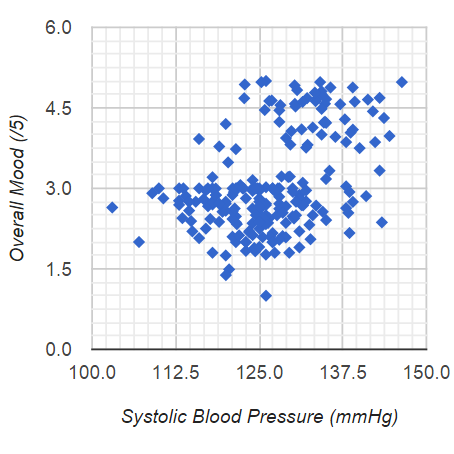 In order to reduce suffering through the advancement of human knowledge, I have chosen to share my findings regarding the relationship between Systolic Blood Pressure and Overall Mood.

Using a two-tailed t-test with alpha = 0.05, it was determined that the change in Overall Mood is statistically significant at 95% confidence interval.

As with any human experiment, it was impossible to control for all potentially confounding variables. The confidence in a causal relationship is bolstered by the fact that time-precedence was taken into account in all calculations. Furthermore, in accordance with the law of large numbers (LLN), the predictive power and accuracy of these results will continually grow over time. 227 paired data points were used in this analysis. Assuming that the relationship is merely coincidental, as the participant independently modifies their Systolic Blood Pressure values, the observed strength of the relationship will decline until it is below the threshold of significance. Furthermore, it will be very enlightening to aggregate this data with the data from other participants with similar genetic, diseasomic, environmentomic, and demographic profiles.